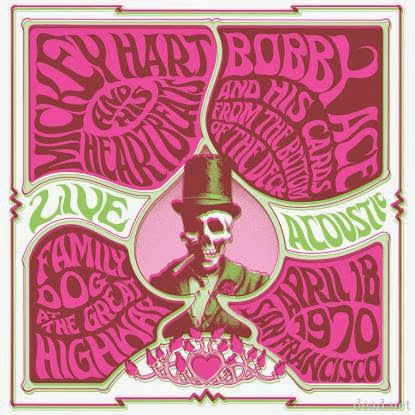 Silver Threads and Golden Needles is one of those songs that I just don’t know that much about, but one that I’ve always enjoyed when I heard it. The song has only made it onto three releases (Rare Cuts and Oddities, Road Trips 3.3, and this one) There is some cool history of the song if you follow the lyrics link above.

Apparently Wanda Jackson first recorded the song, but that may not be where the Dead learned it. From the site above:

Subsequently, “Silver Threads And Golden Needles” was a hit for the Springfields in 1962. Their version omits the verse “I grew up …”.

It’s not clear what version the Dead learnt their’s from. The Springfields is the best known, but omits one of the verses the Dead sang. But the lyrics the Dead sing are closer to the Springfield’s version than Wanda Jackson’s (eg “… mend this heart of mine” rather than “… patch up.” I presume they learnt it from someone else’s recording, but I haven’t yet identified who’s.

One of the great things about the Dead’s formative years is that gems like Silver Threads and Golden Needles surface now and again and give us a completely new context for our frame of reference for the band. The only downside is that there aren’t as many tapes from the early Dead years and no doubt a lot of interesting tunes have been lost to time. But we can all hope that some day we get a Slewfoot or a similar diamond in the rough on a release.

It takes a just a few moments, but the strains of an actual song begin to emerge and Bobby provides the chanteuse’s call. Jerry keeps himself busy with a range of licks underneath the verse, and even adds some more while also contibuting to backing vocals to the chorus (and in a much higher range than what we’re accustomed to hearing). The recording here isn’t the best, but the acoustic vibe is really revealing. This is a pretty straightforward reading of the song, and there’s no real expectation of jamming, but it’s a beautiful little number and definitely worth giving a listen. Before the track ends you can hear Weir chastising Bear about the PA.